Loyalty to Promises or Politics?

You are My friends, if you do what I command you... I have made known to you everything that I have heard from My Father." John 15:14-15 NRSV 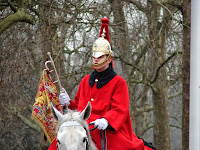 In the early first century, Roman emperors expect the people to declare their loyalty to Caesar  acknowledging him as the supreme power. This annual public declaration of loyalty requires every citizen to place an offering on the altar saying, "Caesar is Lord!" Those who refuse, such as Christians who profess their loyalty to Christ, are frequently mocked, arrested, tortured and killed. Under Nero, one of the cruelest Roman emperors, Peter and Paul are put to death, crucified upside down and beheaded respectively, for spreading the Gospel message. The message of the Jesus-followers explains there is a kingdom greater than Rome, directly in opposition to the Roman world view.

Everyday, the outward expressions of our values conjoin with our commitments to demonstrate where our deepest loyalty lies. When material possessions, political affiliations, and social rankings become priorities, when want replaces need, when spiritual riches dwindle, divided loyalty exposes us. The very first of the Ten Commandments clarifies, "You shall have no other gods before Me." Jesus tells us, "No one can serve two masters for either he will hate one and love the other or he will be devoted to one and despise the other." In another lesson, Jesus reminds that just like you can identify a tree by its fruit, you can identify people by their actions. Loyalty becomes the fruit of our fellowship.

The Old Testament uses the word hesed for loyalty 249 times, and according to Mounce's Complete Expository Dictionary it "is one of the richest, most theologically insightful terms in the OT," Meaning "unfailing love, kindness and devotion," this kind of loyalty usually grows within a relationship, often in a covenant relationship. A covenant relationship involves a promise or vow, whether between God and a person or between individuals.When we enter into a covenant relationship with God, His divine, everlasting promises of reconciliation with Him and victory over sin lavish us with Grace. Remaining in fellowship with God develops our spiritual understanding of trusting Him. This trust blossoms into love evidenced in our lives - in our relationships. The Kingdom of God is greater than Rome, greater than the world, greater than this universe. Does your public declaration of loyalty declare "Jesus is Lord" of my life, my everyday, my every moment? ~ dho
Posted by Breathing Room For My Soul at 5:00 AM