Then he brought them out and asked, “Sirs, what must I do to be saved?” They replied, “Believe in the Lord Jesus and you will be saved, along with everyone in your household.” And they shared the word of the Lord with him and with all who lived in his household. Even at that hour of the night, the jailer cared for them and washed their wounds. Then he and everyone in his household were immediately baptized. He brought them into his house and set a meal before them, and he and his entire household rejoiced because they all believed in God. Acts 16:26-34 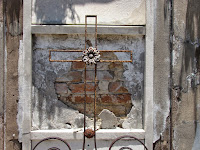 As Paul and Silas are praying and singing hymns to God, the other prisoners - and probably the guard - are listening. Suddenly there is a “massive earthquake”; the prison doors open and the chains fall off all the prisoners. The Philippian guard panics as he is in charge of Paul and Silas. Facing certain death if they escape, he draws his sword to kill himself. Just then Paul calls to him, reassuring the guard they are still in the prison. The guard falls to the ground asking, “Sirs, what must I do to be saved?”
Now, the fact that Paul did not escape is in the guard’s favor, as he is accountable, but more has softened his heart. Listening to the Gospel message in the prayers and hymns of Paul and Silas has been preparing the guard. Possibly he had been wondering why would they be so joyful in these desperate and dire circumstances. Paul shares the word of the Lord with him and his household. Everyone is immediately baptized. “They all believed in God.”
Halley’s Bible Handbook says, “The Word is called the instrument of the soul’s birth.” The guard and his entire family experiences spiritual birth because the Word is shared with them. Listening to spiritual truth opens our heart and mind to God. What “prison” is holding you hostage? Are you praying and singing hymns of praise to God while in that prison? Who is listening to how we deal with difficulty? Someone, somewhere IS listening. -dho