This Is Your Portion 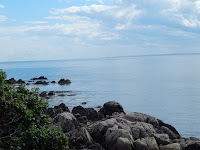 “Jeremiah is an anthology or collection of writings drawn from an entire lifetime of prophetic ministry. The narrative sections scattered throughout the book are loosely structured around the main events of Jeremiah's life in ministry, which themselves were shaped by Judah's decline, fall, and exile in Babylon.”[1] The chronological order of Jeremiah varies, often depending on the Biblical historians. Most all agree, however, that the order of the Book of Jeremiah in the Holy Scriptures does not necessarily follow the historical sequence of events.

Some divide Jeremiah into thematic categories such as “Judah’s Sin and Judgement” (Ch. 1-45), “Prophecies Against the Nations” (Ch. 46-51), and “A Sobering Ending” (Ch. 52).[2] Some commentaries like to order Jeremiah by topics to include judgement, preaching, hope, prophecy. Generally, most agree the timeline of events is between 627 and 585 BC, accounting for roughly 40 years of Jeremiah’s ministry. At another time, we will take an in-depth look at Baruch, Jeremiah’s scribe who also figures prominently in Jeremiah. While some scholars question if Jeremiah is the author of fifty-two chapters, overall, they credit Jeremiah with authorship.

Another way to look at Jeremiah is the varied structure of the book: “visions and prophesies of judgement as well as personal laments” (Ch. 1-24), “speeches of Jeremiah and stories about him” (Ch.25-45), “prophecies of restoration and comfort” (Ch. 30-33), “prophecies against the nations” (Ch. 46-51), and “historical appendix” (Ch. 52).[3] While the Book of Jeremiah follows one order in the original Hebrew writings, it follows “a different order in the Septuagint”[4] The messages are the same.

The timeline of 627-586 or 585 BC follows the book’s progression although some events are re-told or referenced in later chapters. It can be unclear at times who is the ruling King of Judah, we know Josiah (640-609 BC) rules for thirty-one years and during Chapters 1-12, while in the latter chapters, his successors reign. In total, five kings rule Judah during the writings of Jeremiah, Josiah being the only one to truly worship Yahweh.

Scholars generally agree with the accuracy of the writings within the context of events. Chapter 1 and Chapter 52 serve as bookends to this collection. Chapter 1 is somewhat of an overview and gives some historical perspective. Chapter 52 describes the destruction of Jerusalem and the Temple , but conclude with a message of hope. So, while not historically sequential and perhaps repetitive in its message, the Book of Jeremiah reveals the heart of God’s prophet and life of an obedient servant of God while bringing a most difficult message to Judah.

This is what commentaries call one of Jeremiah’s “object lessons” as he uses visual ideas like allegory and metaphor to make his point. This begins the chapter with the “linen sash”. Translations call this linen object various things such as sash, loincloth, waistband, girdle, and belt. Some suggest this is a undergarment that represents intimacy or an intimate relationship. Another suggestion is the sash represents part of the garments a priest wears (Exodus 28:4) and denotes holiness, dignity, and position. Whatever it is called, Jeremiah is told to go and bury the item. Then he is to return after some time and dig up the item, knowing it would be ruined.

Another debate arising among scholars, did Jeremiah go all the way to the “Euphrates” which is several hundred miles from Jerusalem and would take around 3-4 months travel time? Some suggest the ”Euphrates” may refer to “Perath [being] the same as Parah (Jos 18:23), near the modern Wadi Farah. Alternatively, it may refer to the Euphrates River.”[5] This would be only a short distance from Jerusalem. Perhaps the idea of such a long trip is indicated to make a point of significance. The meaning of a long journey and the ruined sash depicts Judah’s relationship with God as “profitable for nothing”. (v 7) God says, “I will ruin the pride of Judah and the great pride of Jerusalem.” (v 8)

God’s words close this section (v 11) with His hopeful promise and disappointed reality of the Hebrew people, “That they may become My people, for renown, for praise, and for glory; but they would not hear.” Again, we see the unrepentant hearts of the people.

Another image lesson is the wine bottles. In verse 13, all the inhabitants will be filled with “drunkenness” and there will clash with each other. God affirms, “I will not pity or spare nor have mercy, but will destroy them.” This symbolizes a defeat, full of shame and pain. The next visual we are given is “darkness” in verse 16. There is stumbling on the “dark mountains”while “looking for light”.  Images of God leading the Israelites in the wilderness for forty years comes to mind, leading them as cloud by day and fire by night. Now prophesy says, “the LORD’s flock has been taken captive.” God will not protect them from invasion and captivity.

Verse 18 mentions “the king and to the queen mother” and may suggest king Jehoiachin. The leaders are filled with pride. “During Jehoiachin’s reign, Nebuchadnezzar’s armies besieged Jerusalem, and both Jehoiachin and Nehushta [his mother] surrendered. Jehoiachin was sent to Babylon and imprisoned (2 Kgs 24:1-15). Jeremiah’s prophecy came true”.[6]

We see Jeremiah, the weeping prophet, lament (v 17-20) for Judah, for “the LORD’s flock”. The leaders’ selfishness would lead to captivity, exploitation of the people and disobedience of all involved will bring doom. Verse 22 asks, “Why have these things come upon me?” It is like choosing one’s own way and then wondering about the consequences. God says He will “scatter” them like chaff, exactly what an agricultural culture could understand, the discarded part of the wheat from the threshing floor blows away just as wicked Judah – unnecessary and worthless. God reminds that their choices, their idol worship, and unrepentant hearts, “This is your lot, the portion of your measures from Me.” Trusting in falsehoods and participating in wickedness determines their outcome.

One thought that keeps coming to my mind as I read and study the lesson this week is the part where God says, “This is your lot, the portions of your measures from Me… because you have forgotten Me and trusted in falsehood.” There is similar language that I remember in Psalms. David writes, “LORD, You alone are my portion and my cup; You make my lot secure.” (Psalm 16:5) These use the same words and phrasing but have opposite truths. Both are promises from God, but not both are good.

In Psalms, the verse is saying that the author, King David, chooses Yahweh as his portion or inheritance and our share of secure. Choosing God as our inheritance is about eternal life. God’s promise of redemption brings the security we need. Through Jesus, the Messiah, we find our inheritance which is grace unmeasured. When we place our faith in Christ, or use David’s words to claim that Jesus is “my portion”, everlasting life becomes our inheritance.

In this week’s lesson in Jeremiah, God is saying to Judah that they are His people, and as people of His covenant, this gives them an inheritance. Israel’s allotment first comes in the form of the Promised Land, a portion or inheritance from God to His people. The land is given, and God is their God, but disobedience and turning from God prompts His reply. NOW, God is saying maybe you do not want this land, you do not want me as the One True God. IF this is true, then, “This is your lot, the portions of your measures from Me.” God takes the land away allowing an army from the north to invade and capture them, to destroy and tear down their cities and the Temple.

As David concludes his psalm of praise, his faith in God recognizes His great blessings. “You make known to me the path of life; in Your presence there is fullness of joy; at Your right hand are pleasures forevermore.” (Psalm 16:11) We, too, find our hearts full, and God alone is enough. While our paths may wind and roll through difficult times, our true inheritance is secure in Christ. The ‘path of life’ is to follow Jesus, to know the ‘fullness of joy’ in His presence, and to know at the end of this life, we have eternal life with Him. This is soul-security!

As long as I can remember, my dad frequently used this phrase, “a leopard never changes his spots” when it was unlikely something (or someone) would actually change. For many years, I never knew where the phrase came from. In the lesson today, the question is rhetorically asked, “Can the Ethiopian change his skin or the leopard its spots?” This example suggests that God knows the hearts of Judah and  their struggles with wickedness, and it is not likely they will change.

·         Do you have any bad habits that may have been with you a long time that are interfering with necessary changes for better?

·         Am I so accustomed to certain patterns of behavior that I cannot see better choices?

·         Am I stuck in a rut that is preventing me from spiritual growth? What will I do to change the outcome?