Ordinary Days of Summer - May is Brain Cancer Awareness Month

We all need some positive and uplifting thoughts and stories to remind us of God’s goodness and simple joys. It’s that time of year when kids set up homemade lemonade stands! I think if possible, you should always stop and buy a cup of innocence and hope and entrepreneurship. The smiles they return will be pure bonus! Below you will find a sweet and not-so-usual story of my nephew’s lemonade stand.

Designed in the spring of 2009, seven year old Thomas drew his plans for his idea. Together, Thomas and his dad built his design the summer of 2009, with Thomas doing all the painting and lettering. This Lemonade Stand served countless everyday boys and girls, moms and dads, strangers and friends, police officers and sheriffs and soldiers, and probably a few dogs. It proudly stood summer after summer on the side of the road just off Main Street in Raeford, NC, and spent the winters just off ‘Me’s Road‘ (in the back yard!). 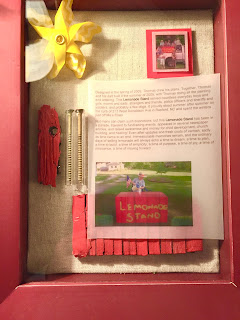 Not many can claim such distinctions, but this Lemonade Stand has been in a parade, traveled to fundraising events, appeared in several newspaper articles, and raised money for child development and a church’s new building, along with bringing awareness to Childhood Cancer and celebrating God’s healing! Even after several updates and fresh coats of varnish, sadly, its time came to an end. Immeasurable memories remain, and the ordinary days of selling lemonade will always echo a time to dream, a time to plan, a time to build, a time of simplicity, a time of purpose, a time of joy, a time of innocence, a time of moving forward… dho 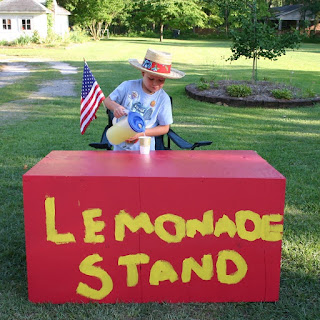 Thomas, an Eagle Scout and HS Honor graduate, just finished his Sophomore year at Appalachian State University. He is a Brain Cancer Survivor, after surgery and radiation treatments in 2011!
Posted by Breathing Room For My Soul at 2:19 PM

Email ThisBlogThis!Share to TwitterShare to FacebookShare to Pinterest
Labels: Ordinary Days of Summer