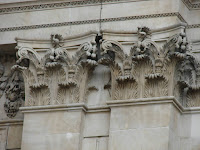 Because for decades the people of Judah deliberately choose to disobey god and worship false gods and make sacrifices to foreign deities, God’s righteous judgment comes in the form of exile to Babylon. When Nebuchadnezzar captures Judah and destroys Jerusalem, for seventy years the Hebrew people will be exiled to Babylon. Times of disaster and grief can draw a person or a nation to seek a new way of living, can be a time of religious growth. “The influence of this exile upon the religion of Israel was enormous.”[1] Often circumstances become vessels to help enrich, deepen, and clarify perspective. Remembering there has been at least two deportations, although some references say three, various estimates of between 25,000 to 50,000 people are exiled. Numbers are inconclusive as women and children are usually not counted. Among these people are high officials, priests, and the more wealthy people of Judah, along with their families. Recall the poorer people remain in Jerusalem and live among the ruins.

Jeremiah’s message always refers to worship as a matter of the heart. These messages from Yahweh sound very familiar, like Isaiah’s messages a hundred years prior. The covenant God makes is not an outward covenant, not about stones and rituals, but a covenant of the heart. In the years of exile, far away in a distant land, without a temple or a tangible sacred altar, “it was this faith that religion was a matter of inward attitude rather than outward institution that kept Hebrew faith alive.”[2] Jewish theology of monotheism, believing in on God, comes full circle in this Gentile land, full of its pagan deities and rituals. Perhaps they remember Jeremiah’s prophecy that God willingly welcomes penitent Gentiles. The idea of individual morality and individual responsibility to God evolves, along with echoes of Jeremiah denouncing the idols as false gods.

In his prophecies, “Jeremiah pictures a time when all nations shall… come with confession to Yahweh and shall be welcomed by him.” (16:19-21) Israel long believes that because God has chosen them, they are set above all others. The Jews discover God’s plan includes their knowledge of Him and through suffering others will know Him. This great insight is birthed from the devastating pain of exile.

Ezekiel, the young boy exiled to Babylon from Jerusalem, becomes a priest then prophet while encouraging the same principles, the same attitudes that Jeremiah had given in Jerusalem. Known as both counselor and comforter to the exile, Ezekiel draws up “a new plan for the reconstruction of the political and religious life of Israel” for whenever their return would come. (Ez 40-48) Details about the temple and the sacred rituals emphasize the religious ceremonies that Ezekiel, as a priest, would understand. Some of Ezekiel’s guidelines pave the way for priestly example. Other older priests from Judah now exiled, become “guardians of ancient traditions and rituals.”[3] As the old traditions find new life and a new spirit emerges, the sensual and pagan practices are eliminated.

As Ezra and Nehemiah return to Jerusalem, rebuilding efforts involve the wall around Jerusalem and the temple. Encouraged to “bind themselves to keep the law”, their “ideal of religion as a thing of the heart had been abandoned.”[4] While some continue to embrace the individuality of souls, religious practices become more about external rule, about Mosaic law. Observing the law, reading the law, and meditating on the law continues. Over time, the new Judah is reorganized and its social life renovated. “The exile profoundly affected theology, ritual, morals – the theory of religion, the practice of worship, and the application of religion to life.”[5] Life centers less on the bitterness of exile and mostly on the goodness and provision that Yahweh has given.

Influences in exile for Israel comes in other ways over many centuries. Successful businesses, arts and literature, and great teachers of the law leave their marks. Some influential, prosperous Jews stay in Babylonian, remaining faithful to their ancestral roots and religion, even developing schools of law that influence the entire Jewish people. The exodus from Egypt becomes foundational for the Hebrew people, and the covenant God makes with His people is fundamental. But as for spiritual growth, “Perhaps no single event in Hebrew history influenced her religion more deeply than the Babylonian Exile.”[6]

In chapter 49, six more countries are given severe warnings: Ammon, Edom, Damascus, Kedar, Hazor, Elam. Beginning with the Ammonites (vs 1-6), long associated with the Moabites, their ancestry in Scripture also connects them to Abraham’s nephew, Lot (Gen 19:37-38). “When the Assyrian Empire fell to the Babylonians in 612 BC, the Ammonites move into territory once held by Judah.”[7] At one point, Ammon joins Judah in a conspiracy against Babylon. “When it failed, as Jeremiah warned that it would, many survivors fled to Ammon as Nebuchadnezzar crushed Jerusalem.”[8]

Rabbah (v 2) is known in the New Testament as Philadelphia and is the capital of Ammon. The “remains form part of the impressive citadel at the heart of modern Amman, Jordan.”[9] In the verses about Ammon, Malcam, their chief god, is also known as Molech and is the “god to who child sacrifices were tragically offered in Judah (Jer 32:35, 2Kg 23:10).”[10] The reference in verse 4 to “unfaithful daughter” or “backsliding daughter” is a “personification of the Ammonites.”[11] These Ammonites, dispersed and defeated by Nebuchadnezzar in 582 BC, never regain autonomy again, but in verse 6 God promises “to restore the fortunes of the sons of Ammon”.

Located south of the Dead Sea, Edom is a mountainous region with some pastureland. “Many Edomite dwellings were cut into the faces of the high, craggy mountains.”[12] Descendants of Esau, Jacob’s twin brother, the Edomites can be found throughout the Old Testament, and come under Assyrian control after the Northern Kingdom (Israel) falls. The prophet Obadiah “indicates that the Edomites participated in the 586 BC destruction of Jerusalem.”[13] In verses 7-22, the prophecy against Edom reveals disaster and punishment. Known for its wisdom, even this “wisdom in Teman” cannot save Edom. The two towns listed, Teman and Dedan, are at “opposite ends of the country, so this shows the completeness of God’s destruction of Edom.[14] Edom’s greatest sin is “arrogance” or pride (v 16). Today, this rocky land is called Petra, in southern Jordan.

Assyria defeats Damascus (v 23-27), then Babylon conquers it in 605 BC. Once the capital city of Syria, Damascus finds itself in conflict with Israel. Located along the “fertile Barada River at the crossroads of major trade route,”[15] this gives the city great prosperity. Damascus is also “a major cosmopolitan center during the New Testament era, when it was home to a large Jewish community.”[16] Distress and pain “like a woman in childbirth” (v 24) will come to the city. Destruction of the city wall by fire is coming.

In verses 28-33, Kedar and Hazor are nomadic tribes. “The region of Kedar was the most important Arab tribal group in the biblical period”[17] and known for trade caravan and sheepherding. Hazor represents a group living in the desert that frequently causes problems with other groups. These people face “a scheme” (v 30) by Nebuchadnezzar and “a disaster from every side” (v 32). They are destroyed by Nebuchadnezzar in 599 BC.

The closing verses of chapter 49 (34-39) possibly mean that “Jeremiah simply meant that the Lord would judge the ends of the earth.”[18] Scholars are not sure exactly where Elam is located, no cities are mentioned. While sin invades the hearts of people, there is no “geographical location nor national heritage [that] insulates one from responsibility to the Creator.”[19] In verse 38, the phrase “I will set My throne in Elam” is an “expression [that] depicts the establishment of the kingdom of the God of Israel.”[20] Elam’s restoration promised “in the last days” (v 38) is “fulfilled at Pentecost; see Acts 2:9).”[21] This prophecy predicts “God will scatter the people of Elam (v 36) to the four winds… [with] a large number of persons of Persian descent taking up residency all over the world.”[22] Today, the ancient lands of Elam, modern Persia, is known as Iran.

The message to the nations is that no country is outside of God’s judgment, to include the superpower Babylon, or as we know it now, modern-day Iraq. God is Sovereign.

When I discovered Your words, I devoured them. They are my joy and my heart's delight, for I bear Your name. Jeremiah 15:16

This 3rd Sunday in the Advent season sometimes is called "Gaudete Sunday" from the Latin meaning rejoice. Others call this candle Joy, which is sometimes pink. Joy-full celebrations in the Christmas story show angels singing of great joy, shepherds telling with holy awe, wise men worshiping in humble adoration. The expectant waiting in Advent leads us to celebrate Christ as the Messiah, to seek Christ more every day, to know Jesus as our source of joy.

In Philippians 4:4, Paul reminds, "Rejoice in The Lord always, again, I will say rejoice!" The world continually bombards us with crisis and chaos, disappointment and doubt, fear and fatigue. The contrast between Paul's words and our realities appear to clash. How can we rejoice when difficult circumstances prevail, when constant hardship lingers? God's word provides His wisdom, reveals His promises, offers His hope. Reading and studying the Bible teach us how to pray, who to love, and where to serve. We can only find real joy in Jesus.

In the Nativity, Hope comes quietly, Love comes small, Joy comes gently, but with the Crucifixion, Hope faints, Love chooses, and Joy weeps. These two events cannot be separated, the sweet and the bittersweet. The emotions born with Jesus' coming crash into the harsh realities of the cross; the Messiah comes because the world needs Grace. With His Resurrection, Hope shouts, Love lives, and Joy reigns! Through Grace, Christ brings us abundant joy. God's word instructs us, "Let the word of Christ richly dwell within you." [Colossians 3:16] Discover and devour God's word. Then, and only then, can we Celebrate God all day, every day. I mean, revel in Him. (Philippians 4:4 MSG)

Eugene Peterson writes, “Jeremiah and people like him keep showing up in our lives, going beyond the boundaries of what is safe, learning new languages, discovering alien cultures, braving hostility, and telling the stories that prove that the life of faith can be lived in every place and among all people.”[23]

Do you have someone in your life who challenges you step outside your comfort zone?

Have you told your God-story to someone?