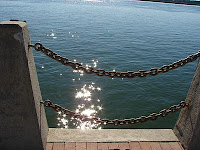 Remember the Hebrew prophet, Daniel, who along with his three friends, Shadrach, Meshach, and Abednego, are exiled to Babylon? When the three friends refuse to fall down and worship the king’s golden image, the king is absolutely furious and commands them to be “thrown into a blazing furnace”. (Daniel 3) He is so furious that he orders “the furnace heated seven times hotter than usual.” Shadrach Meshach, and Abednego are tied up and thrown into the furnace.

“The king’s command is so urgent and the furnace to hot that the flames of the fire kill the soldiers” (v 22) who push the three into the furnace. The king is amazed as he clearly sees “four men walking around in the fire, unbound and unharmed.” (v 35) When this most familiar story ends, Shadrach, Meshach, and Abednego exit the furnace completely fine with no signs of fire. This king changes his viewpoint and decrees, “the people of any nation or language who can say anything against the God of Shadrach, Meshach, and Abednego shall be cut into pieces and their houses be turned into piles of rubble; for no god can save this way.” This king is the infamous Nebuchadnezzar. For a time, Nebuchadnezzar has a moment of true revelation of the One True God and discovers he is no match for the God of Israel.

One of the most powerful rulers of all time, Nebuchadnezzar (or Nebuchadnezzar ll) the king of Babylonia becomes the longest-reigning of the Babylonian Empire (605-562 BC). He is the most influential ruler of the Empire when Babylon reaches its greatest power and prosperity. Born into royalty in Babylon, Nebuchadnezzar is the son of Nabopolassar, the founder of the Chaldean dynasty. Including Syria and Palestine, his successful military campaigns bring him fame, especially his defeat of the Egyptians. Mostly Nebuchadnezzar is known as the king of Babylon credited with taking thousands of Hebrew people into captivity over several years and destroying Jerusalem in 586 BC. Along with conquering Judah, Nebuchadnezzar raids the temple that Solomon built in Jerusalem and takes all its treasures to Babylon.

Under his leadership, the Babylonian Empire greatly expands while much building and improving of Babylon occurs. Many pagan shrines are restored. Nebuchadnezzar builds himself a palace and a lavish summer palace. The Hanging Gardens of Babylon is a splendid architectural accomplishment of his. All this extensive, elaborate construction for his own pleasure happens while the people live in immense poverty.

For all his military achievements and political accomplishments, Nebuchadnezzar’s greatest faults are arrogance and pride. History acknowledges him as an excellent strategist. While he does proclaim God’s power, his brief loyalty falls to pride. Later in his reign, for a period of time, Nebuchadnezzar experiences insanity or a delusional disorder. (Daniel 4)

The narratives in the book of Daniel “presents a timeless demonstration of separations from impurity, of courage against compromise, of efficaciousness in prayer, and of dedication to Him whose kingdom endures from generation to generation.” (Daniel 4:34)[1] Nebuchadnezzar must always be remembered as a instrument of God, used for God’s greater purpose. “King Nebuchadnezzar’s path crossed both the prophets Daniel and Jeremiah in his lifetime, both who carried important messages for God’s people about the New Covenant (the coming of the Messiah, Jesus Christ).”[2]

In Daniel 4:36-37, Nebuchadnezzar “writes an official document giving personal witness to what God has done for him.”[3] It would seem unimaginable that Judah’s most wicked King Manasseh (2 Chronicles 33), and the “greatest Bible villain”[4] Nebuchadnezzar would give testimony to recognizing the One True God. God is greater and always exceeds our understanding.

(If you are counting, last week, Chapter 26 was half-way of the Jeremiah study!)

This week’s lesson brings another action-sermon. The image of a “yoke” is used. Agricultural folks would be familiar with the wooden object with a cross bar places around the necks of oxen when plowing the fields. “Make for yourselves bonds and yokes” describes submission. Jeremiah probably looks and maybe feels foolish walking around with this yoke. In Chapter 27, Jeremiah speaks his message to three groups.

First, Jeremiah takes God’s message to “submit to Nebuchadnezzar of Babylon” to the ambassadors from foreign lands visiting Jerusalem. The message is that “all nations shall serve” Babylon because God is giving all the lands to the Babylonian Empire. These foreign lands include Edom, Moab, Ammon, Tyre, and Sidon. If you don’t submit you will perish. Jeremiah warns not to listen to lies coming from false prophets in Judah or the fortunetellers and sorcerers in the Gentile nations.

Secondly, Jeremiah speaks the message to King Zedekiah of Judah. Same message and same consequences are repeated. Zedekiah is warned not create a rebellion against Babylon. Thirdly, Jeremiah, with his yoke, speaks to the priests and all the people. Peace-prophet or false prophets that say what the people want to hear are simply being deceptive. They “fight with familiar weapons of religious conflict… emotive issues… intimidation.”[5] All the gold and bronze vessels, the sacred and holy treasures have already been taken from the temple, probably during the second of three deportations of Judah’s people around 597 BC. Truth is, they would not be returned in the first exiles return to Judah after Babylonia defeat, decades later. (Ezra 1:7-11)

The yoke is symbolic of submission. Jeremiah is called to be a “prophet to the nations” (1:5) and remains faithful to his calling. We find God’s promise at the end of the chapter when He addresses the holy and sacred temple vessels. When the time comes, the LORD says, “I will bring them up and restore them to this place.” We can trust God’s greater plan and purpose.

God must be the Yoke of our submission. We must be yoked with God’s truth, while submitting to His leading and trusting in His promises. God is always listening to our laments and discouragements, just as He comes along side us during times of uncertainty and chaos. God rejoices with us, celebrates with us, holds us and loves us. I must remember the Yoke, the One who is beside me. This is my Hope!

Petitions to You are endless, with asking and telling, questioning and knowing, seeking and listening. The soul finds hope beside doubt, truth beside lies, joy beside sorrow, love beside betrayal. The wounds cut so deep and so wide that they cannot be measured. Consequences are unfair, circumstances are cruel, and the burdens are too heavy. Adonai, remind me of Your unfailing love.

When darkness falls as the day ends and stillness calls, it is Your voice that whispers to the weary Come to Me… and I will give you rest… for I am gentle and humble in heart and you will find rest for your souls. Hold the tears and the truth that disappoints; hear the cries and the heart that breaks. Jesus, Lover of my soul, remind me that You are the Yoke, the One who shares all burdens.

“God is in charge of all of history, and obedience is required from all.”[6]

“In our time, God can and will take all the stuff in our nation, churches, and homes away from us because we trust in that stuff more than we trust in our Lord.”[7]