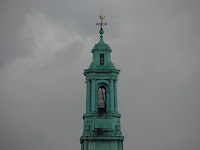 “Tahpanhes is a fortified city in the eastern part of the Nile delta, near what is now the Suez Canal.”[1] This becomes “a city of refuge for the Jews escaping from Palestine.”[2] Here, Jeremiah’s ministry ends. The city is believed to be named for a “powerful general who brought the surrounding area under firm Egyptian control in the eleventh century BC.”[3]

Ezekiel gives a prophesy concerning this city (Ez. 30:19) but uses an alternative spelling, Tehaphnehes. Today, this site is identified with Tell Dephneh. The Pharaoh’s palace in Tahpanhes, “where Jeremiah buried stones as a promise of Nebuchadnezzar’s invasion (Jer. 43:9), has been identified with the fortress of Psammetichus.”[4]

In 1886, an archaeologist, Flinders Petrie, excavates in the area, finding “Greek pottery and a fortress of Psammetichus which includes a brick platform” that might be the “brick pavement” of the house of the Pharaoh in Tahpanhes.[5] In Chapter 43:9, Yahweh tells Jeremiah, “Take some large stones in your hands and hide them in the mortar in the brick terrace which is at the entrance of Pharaoh’s palace in Tahpanhes.” Petrie also excavates in Memphis, Egypt, and some wonder if it’s possible that Tahpanhes mentioned here is Memphis. In this area he discovers two “great stones” in front of Pharaoh’s palace. G.M. Matheny, after extensive research, believes Petrie’s finds in Memphis are the two great stones, “one of rock crystal and one of red jasper.” Great may suggest valuable.[6]

Psammetichus rules Egypt 664-610 BC. His father Necho, ruler in 672, becomes a vassal ruler when Assyria is in control. Then, his son, Necho II of Egypt, becomes king in Egypt (610-595 BC) during Nebuchadnezzar’s earliest invasion of Jerusalem in 609 BC. During the Neo-Babylonia Empire, he plays a significant role. Likely, this is the Necho, King of Egypt, included in Biblical narratives around the fall of Judah.

“As soon as Jeremiah” tells them God’s plan, the leaders in their arrogance reject this and accuse him of “telling a lie!” (v1-2) They also discredit Baruch, the scribe of Jeremiah, calling him a traitor. Johanan and other leaders create their political spin and decide not to obey God’s plan to stay in Judah. All the Jewish refugees, those who had returned along with those sent to Mizpah, are taken to Egypt. This includes “the men, the women, the children, the king’s daughters, and any left under Gedaliah’s command.” (v 6) Jeremiah and Baruch are among the hostages.

The prophet Jeremiah says God will bring “My servant, Nebuchadnezzar, the king of Babylon, to Egypt.”  God will place Nebuchadnezzar in charge, bring him victory, and give Nebuchadnezzar the throne over these stones that Jeremiah is to hide in the palace wall. Predictions are that Nebuchadnezzar will attack Egypt, death and captivity will come. Fire will burn the many temples of the Egyptian gods. These “obelisks of Heliopolis” are sacred pillars that are “about six feet square at the base, tapering up to sixty feet” in height.[7] These obelisks worship and honor “the Egyptian sun god, Ra.”[8] In Heliopolis, these obelisks are called the “temple of the sun.”

The obedience that keeps His commandments becomes the outward expression of our love for God. Andrew Murray from A Life of Obedience

Disobedience starts all our problems. In the Garden, God creates everything that anyone could ever need. Only one thing God asks from Adam and Eve, "Do not eat from the tree of the knowledge of good and evil." Disobedience ends the completeness of Eden.

The world comes at us full force with numerous options for personal entertainment, strong rhetoric within political parties, countless organizations to benefit humanity. Many loud voices seek to motivate, include, and sway our thoughts and commitments. While many of these opportunities can generate good, we must seek the paths of the LORD. Another Hebrew name for God, El Roi, the God who sees me, reminds us that God literally sees each person. El Roi meets us at every crossroad pointing the way of mercy and truth.

Lord, You see my resentment, my indecision, my failure, my uncertainty. So many idols scream at me, demanding allegiance. Holy Father, great is Your faithfulness in showing me unfailing love, mercy undeserved. Help me walk Your paths daily. Amen

As you contemplate these thoughts from Kaiser, what comes to mind? What defines “contemporary scorners of the word of God” for you?

Remember: “The heart is deceitful above all things, and desperately corrupt; who can understand it?” (Jeremiah 17:9)

[6] Truechristianshortstoriesfreebygmmatheny.com “The Quest for the Great Stones of The Prophet Jeremiah”, Matheny, GM