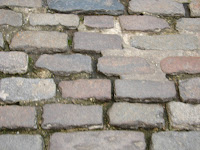 Mizpah, located about 4 miles NW of Jerusalem, sits “on the highest hill in the region, six hundred feet about the plain of Gideon.”[1] Old Testament people like Samuel and Saul and Nehemiah are familiar with Mizpah with recognizable stories of conquering the Philistines, placing an Ebenezer, making Saul the first king of Israel, and rebuilding the wall of Jerusalem. Mizpah, mentioned in Judges 20:1-3 and 1 Samuel 7:5-7, 12-14, 10:17 and other Scriptures, historically marks a place of battle and worship and protection.

“Mizpah meaning watchtower or lookout was called such because it was from that location that travelers from the north would first see Jerusalem.”[2] In 1926, Dr. William Badè begins excavations finding pottery, tombs, grain pits, and cisterns, “however the chief discovery was the city’s defenses. The ancient city had two sets of walls: a smaller inner wall and a large outer wall.”[3] This outer wall is taller and stronger and greater than any other of the military citadels. “Some of the largest stones were so heavy, three or four workmen could not budge them.”[4] This hugely critical outpost serves as a massive defense for Judah.

There is some discrepancy among researchers if modern day locations Tell en-Nasbeh or Nebi Samwil is Mizpah. While the distances of these locations are so close, the geography debate continues. “When examining the evidence from the two sites, the sheer amount of archaeological discoveries from Tell en-Nasbeh that correspond with the biblical accounts strongly suggest that Tell en-Nasbeh is Mizpah.”[5]

Centuries after this area has been a part of Judah’s history, archeologists search for evidence reveal some interesting finds. Two specific findings relate to people in Jeremiah Chapter 40. In 1935, “in the layer of ashes left by Nebuchadnezzar’s fire when he burned Lachish, a seal was among the Lachish Letters bearing this inscription: “Belonging to Gedaliah, the one who is over the house.”[6] Another seal found in 1932 mentions “Jaazaniah (also, Jezaniah, son of the Maacathite, in Jeremiah 40:8; 2 Kings 25:23) who is an army captain with Gedaliah. This seal, found “in the ruins of Mizpah, the seat of Gedaliah’s government (Jeremiah 40:6) [is] an exquisite agate seal” that is inscribed, Belonging to Jaazaniah, servant of the king.”[7]

Today, research and excavation continue to search for historical artifacts. The Alexandria Archive Institute, a non-profit, digital museum (Alexandriaarchive.org), together with Open Context is digitizing thousands of objects that are part of the Tell en-Nasbeh Collection and many other sites. Their goal is to assist research and scholarship. From the ancient Judean hills to 21st Century virtual museums, God’s story continues to be revealed and revisited.

“Chapters 40-41 record the tragic story of the first attempt a governance after the departure of Zedekiah.”[8] In the Ramah refugee camp, Jeremiah is found, waiting like the other Hebrew people for deportation. Rescued from the group being exiled to Babylon, Jeremiah’s rescuer is Nebuzaradan, captain of the Babylonian guard. With notable certainty, Nebuzaradan proclaims, “The LORD your God promised this calamity against this place, and the LORD has brought it on and done just as He promised.” (v2-3) It is possible to believe that Nebuzaradan recognizes the truth in Jeremiah’s prophecy. Freed by the captain, Jeremiah chooses to return to those “left in the land” and reunites with Gedaliah, now appointed governor.

Political controversy soon shows its face among the remains soldiers in Judah. Concern rises that Gedaliah is now the governor and “in charge of the men, women, and children, those of the poorest of the land who had not been exile to Babylon.” (v7) Mizpah, 4-5 miles NW of Jerusalem, becomes the location of the summit between Gedaliah and the Judean soldiers. Ishmael and Johanan, and Jonathan, and others are among these soldiers. Nothing new is offered as Jeremiah’s prophecy is simply repeated by Gedaliah. To stay and serve the Chaldeans does not satisfy these men. Nebuchadnezzar leaves behind an abundant harvest in Judah, and many of the Jews who fled or hid during the invasion return.

While in Mizpah, Johanan privately conveys to Gedaliah that Ishmael is plotting to kill him. Gedaliah does not believe Ishmael will harm him. Since Ishmael is part of David’s royal lineage, he “may have been angry that he had been passed over for leadership”[9] Political chaos reigns during this time as no one knows what to believe or who to trust.

“And the name of the city from that time on will be THE LORD IS THERE.”  Ezekiel 48:35 NIV

While living in Babylon in a refugee settlement among the exiled Israelites, the prophet Ezekiel encounters “the appearance of the likeness of the glory of the LORD. When I saw it I fell face down, and I heard the voice of one speaking”. Through visions to Ezekiel, God reveals His warnings to an unrepentant Jerusalem, judgments on all nations, hope for Israel, and a New Jerusalem. Most refuse to listen to Ezekiel. Forty-eight chapters and over twenty years later, Ezekiel records as the Sovereign LORD declares, ”And the name of the city from that time on will be: THE LORD IS THERE.” Jehovah Shammah, Hebrew for ‘The LORD is there,” describes the New Jerusalem, the same city in Revelation 21:3 where God will dwell with His people.

Although idol-worshiping Babylon seems an unlikely place for Israel to find God, He is there. After Christ returns and all Believers live in the New Jerusalem, God will be there, too. God desires to dwell among His people. God’s presence exceeds our finite boundaries of time, location, and circumstance. Lord, I come acknowledging my infinite dependence on Christ. Whisper the hope of THE LORD IS THERE into my brokenness, into my disappointment, into my weakness, into my silence, into my vanity, into my prayers. Count me alive in Christ. Jehovah Shammah!  Amen

In thinking about the Babylonian army captain, Nebuzaradan, and how he seemed to voice God’s truth, we do not know if he is repeating something he hears and circumstance seems to confirm, or he uses this as rhetoric since the Babylonians are obviously destroying Judah, or perhaps he is simply acknowledging that this so-called-prophecy is true. What is NOT clear, does he have faith in the One True God?